The England Roses have truly blossomed as the year draws to a close as they scoop another award to add their 2018 huge success story. 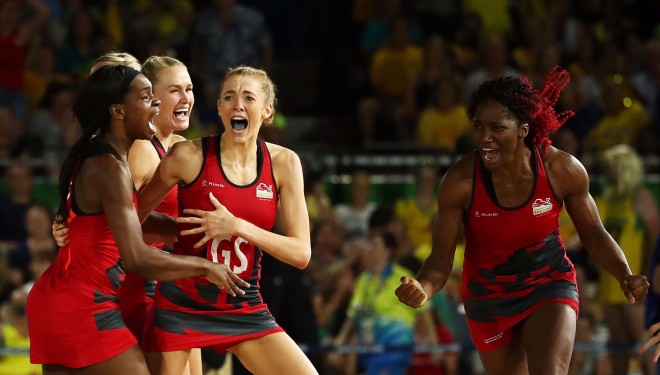 The Rose’s scooped two awards at the BBC Sports Personality of the Year Awards winning Team of The Year & Greatest Sporting Moment Awards.

It was the first Gold medal at the Commonwealth Games for England Netball and DYNAMIK were first to congratulate the team on their success.

Captain Ama Agbeze said: “It has been a very long journey and a long slog. Netball is the ultimate team game. Team sport is very tough. We are so thankful to all our sponsors and supporters.”

DYNAMIK are indoor sports flooring partner to England Netball and continue to offer support and expertise to the winning team and their sport.

Contact the DYNAMIK team for further information on the best solution for your sports facility.

“DYNAMIK were chosen as England Netball’s official flooring partner due to their industry knowledge, wide choice of playing surfaces and expertise.  They really are a one-stop solution for sports flooring refurbishments.”

“Basketball Wales really appreciate the support that DYNAMIK provide all of our clubs from grassroots to elite level sport.  Everyone within team DYNAMIK works far and beyond what is required.”

“British Wheelchair Basketball trusts DYNAMIK for all of their technical advice regarding suitable sports flooring for wheelchair sport.

DYNAMIK is as passionate as we are to about the positive impact wheelchair basketball can have on peoples’ lives whether you are a player, volunteer, official or GB athlete.

Working with DYNAMIK ensures we can help people to create great environments for our sport and with a trusted partner who really understand the interaction between player, sports chair and surface.”