High energy all round over the past few days with the Netball Quad series being held at Copperbox Arena, London.

The England Roses fought hard to defend on their home territory triumphing over the New Zealand Ferns during extra-time, then narrowly being defeated by the World Champions, the Australian Diamonds.

All teams showed finesse and tenacity, playing to the highest level on the DYNAMIK sports floor specially installed for the event. Craig Jack, Commercial Director of Dynamik Sport, received fantastic feedback from all the National Teams which praised the high performance and player comfort that the Dynamik Sprung Portable sports floor provides. England Netball have recently purchased this new Dynamik court which will be used for international matches as well as the World Cup in 2019.

This floor is really something special and will be an asset to the sport of Netball for years to come.

Dynamik Sports Floors are proud to sponsor the England Netball team and wish them every success with their last fixture in South Africa. 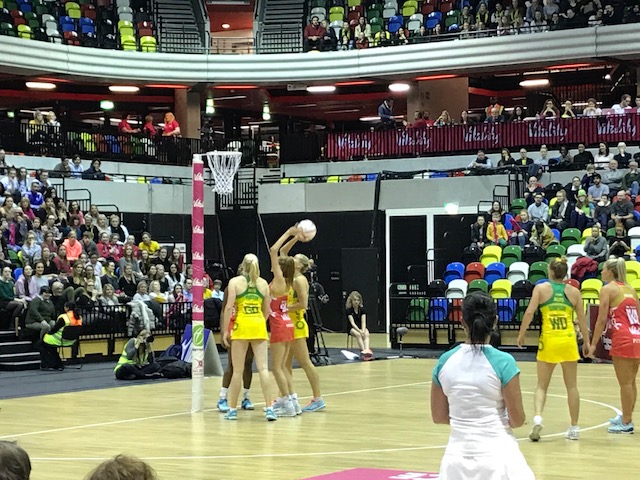 “DYNAMIK were chosen as England Netball’s official flooring partner due to their industry knowledge, wide choice of playing surfaces and expertise.  They really are a one-stop solution for sports flooring refurbishments.”

“Basketball Wales really appreciate the support that DYNAMIK provide all of our clubs from grassroots to elite level sport.  Everyone within team DYNAMIK works far and beyond what is required.”

“British Wheelchair Basketball trusts DYNAMIK for all of their technical advice regarding suitable sports flooring for wheelchair sport.

DYNAMIK is as passionate as we are to about the positive impact wheelchair basketball can have on peoples’ lives whether you are a player, volunteer, official or GB athlete.

Working with DYNAMIK ensures we can help people to create great environments for our sport and with a trusted partner who really understand the interaction between player, sports chair and surface.”